The Rosary — A Powerful Friend

I used to sit in front of God and worry. If anyone had asked, I would have said I was praying. But I didn’t release my concerns to God when praying, I didn’t receive a sense of God’s presence in the midst of the problem I was praying about, and I didn’t feel peaceful after praying. I just felt worried.

Mostly I worried about my twin daughters. Life for them was especially difficult in sixth grade; one was suffering from rejection by class cliques. I saw her pain, but what could a parent do? The answer came when I ran into an old friend – my rosary. In desperation I decided to pray the Rosary every day for the intention of my children. What could I lose, besides 20 minutes a day? 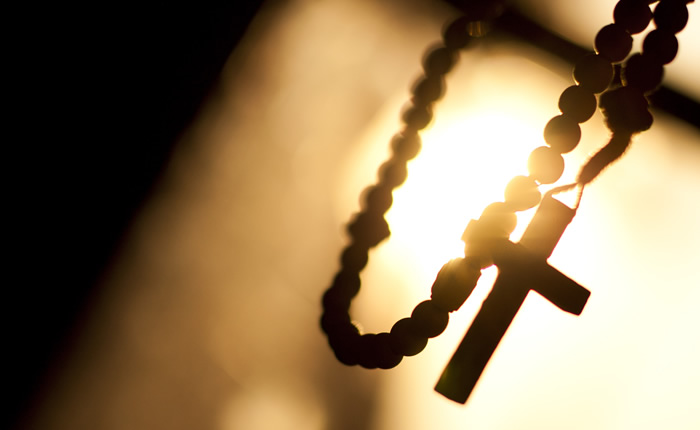 I began in June. With each decade of the rosary, I thought of a concern, such as my daughters’ grades, their friendships, their relationship with each other. Within days of starting my “experiment,” I began to note a change in myself. After 53 Hail Marys, six Our Fathers, six Glory Be’s, one Apostle’s Creed and one Hail Holy Queen, I felt a certain release of my children to God. I started getting a vague sense of God’s presence in their daily struggles. By the end of each rosary, my peacefulness index was up and my worry index was down.

In December, I noticed that the daughter who had been in such pain now seemed happier. In reflecting back, her mood seemed to change in September. I told her what I was seeing. She agreed with me about being happier, but corrected me about the month: “I started getting happier in June,” she said.

Hm-m-m. June. The month I started saying a daily rosary for her and her sister. Maybe there was something to this rosary thing. Maybe this was a prayer form for parents to use to help counteract peer pressure, media messages, and the stresses of society’s turmoil. Maybe, I thought, I should keep on praying the rosary. So I did. But over the years, several challenges arose.

The 24-hour day seemed to shrivel to ten. A twenty-minute commitment is short until it has to muscle its way through a dozen other must-do agenda items. My answer to the time crunch was to say the rosary while doing other tasks.

Now, 80% of the time I say the rosary while I’m walking for exercise. It keeps my brain going while my feet are moving. I also pray the rosary while driving, especially when a traffic jam has me stewing about what I’m not doing while I’m sitting in a cloud of carbon monoxide. Finally, I’ve discovered that the rosary is the world’s best sleeping pill. Whenever I’m fighting insomnia, I start saying the rosary. The last decade rarely arrives. (My mother used to say if I couldn’t finish a rosary, angels would finish it for me. This relieved me of performance pressure, that mental tape that says, “if you can’t do something right, don’t do it at all. “)

Fitting the rosary in with other tasks has meant I rarely have access to a string of beads when opportunity strikes. Instead, I’ve discovered the wonder of my fingers, which seem to have been designed with the rosary in mind. In fact, the only physical rosary I use now is a ring which hangs on a knob in my car. It’s a circle with a cross and ten bumps which I can slip onto a finger and work around while still steering and shifting.

Boredom. Despite the great results in my children’s lives that I attributed to the rosary, after five years it began to bore me. I didn’t want to quit saying it, but it seemed superficial. I struggled with this until I found a quote by Pope John XXIII:
“The real substance of the well meditated rosary consists in a threefold chord. First of all the contemplation of every Mystery. The second element is reflection. Finally there is the intention: that is, intercession.”

Contemplation of the mysteries of the rosary: This was the missing ingredient. Like someone who’s been eating only protein, my rosary “diet” had been imbalanced. I decided to try a richer menu, while still praying for the intention of my children.

I began by thinking of each mystery side-by-side with a particular prayer intention. Soon I discovered it is possible to put a prayer intention into a mystery and reflect on them both. Take, for instance, the Presentation of Jesus in the Temple (the fourth Joyful Mystery). When Joseph and Mary presented Jesus in the Temple, they gave him to God. I often use this Mystery to give my children and all my nieces and nephews to God. I mentally bring a whole generation of children into God’s presence and dedicate their lives to Him. This act means letting go of my agenda for their lives. It means asking Jesus to be Lord of the future of these precious children. I know this act of faith gives me no guarantees. Mary and Joseph gave Jesus to God, and he ended up being tried, convicted and executed as a criminal. But I believe that in the long run, things go better with God. With the Lord, there is always a resurrection.

At the end of each decade of praying for an intention and meditating about a mystery, I pause to absorb and reflect on the past few minutes. Usually the pause is only a few moments, but if I’m experiencing something powerful, I savor that until I feel the urge to move into the next decade. Mary pondered and treasured her life experiences in her heart (e.g. Lk 2:19, 51). The Rosary helps us do likewise.

Narrow focus. After my daughters moved beyond the “emergency” stage of adolescence, I began feeling self-centered about praying only for them. Needs and pain existed beyond the confines of my family, and I was ignoring them. So I expanded my focus. Parish life, friends in crisis, charitable groups I belonged to, elections, national disasters, abortion rulings—these and countless other concerns found their way into the rosary.

Sometimes my mind would go blank when trying to put new prayer intentions into old mysteries. For example, during the Persian Gulf crisis, I couldn’t fathom how to bring the life of Christ into that situation. But as I persisted, thoughts began to come to me, e.g. When I meditated on Jesus carrying his cross (the fourth Sorrowful Mystery), I could envision him helping American families carry the cross of separation from loved ones fighting in the war. When I meditated on the Coming of the Holy Spirit (the third Glorious Mystery), I asked God to pour out the Holy Spirit on the peace negotiators who were attempting to bring a halt to the conflict.

After awhile, I developed a pattern of intentions for each rosary as a way to avoid a narrow-minded focus in my prayer intentions.
One decade for my children. My daughters are now adults, but it’s a crazy world out there. One drunk driver can shatter a good life. Career and marriage decisions last for years. When we parents have done everything else God has called us to do for them, our adult children still need our intercessory prayers. The rosary is a powerful way to pray and let go.

Two decades for whatever concerns are on my mind. On any given day, I can always find at least two concerns that call me to prayer: a neighbor who’s facing surgery, a financial need, a painful transition in my parish. In fact, it’s a challenge to limit these concerns to two, when my little world and the big world beyond overflow with needs.

One decade for peace. I devote a decade of every rosary to reflecting on and asking for some specific increase in peace. I do this in response to Mary’s request at Fatima, where she urged people to pray the Rosary for peace. Without world, national and personal peace, the rest of our quality of life doesn’t count for much.

Any unrest is a candidate for this decade. Occasionally my family needs more peace. Usually, however, battles in the world are my focus: terrorism, civil war in Indonesia, bloodshed in South America, the war against unborn children – a glance at the news gives me plenty of material.

The last decade for thanksgiving. Intercessory prayer can lead me to view the world and my life as one, giant crisis. From this, it’s a short step to hand-wringing. To avoid “Oh, woe!” temptations, I end each rosary with a decade of thanksgiving. It reminds me of all the blessings God has given to me, my family, our nation and our world.

A decade of thanksgiving reminds me of what has happened since I started praying the rosary. The same classmates who rejected my daughter in sixth grade voted to give her the “Christian Girl Award” upon graduation from eighth grade. In high school, the girls miraculously avoided the disasters that make parents turn gray overnight – drugs, pregnancies, etc. When they graduated from college and moved into careers, I could see how God was continuing to guide and protect them.

Sometimes a decade of thanksgiving reminds me of what the rosary has done for my spirituality. First, putting new prayer intentions into old mysteries has helped me experience Christ’s life in today’s world. I recognize the truths of faith in my surroundings. Second, I no longer sit in front of God and worry. Whatever I’m praying for – personal, national or global – I am able to release to God because I sense that Jesus is Lord of that concern. Finally, I’ve come to see with my own eyes that prayer works. Miracles happen, conflicts subside, and peace comes. Whatever the season, whatever the reason, the rosary is a powerful friend.