By Jan Alkire
Originally appeared in Our Sunday Visitor

Christmas 1993 was going to be perfect, and the most perfect part would be having the whole family home for the holidays. Our twenty-three-year-old twin daughters, Beth and Kathy, were each scheduled to fly home in time for the four of us to go to Mass on Christmas Eve. It had been so long since we had all been together.

On December 17 my husband, Fred, and I put up our tree, along with my favorite decoration — the Italian manger scene that graces our mantel each year. On December 18, my perfect Christmas bubble burst. Kathy phoned, saying, Mom, I have chickenpox! Out went perfection; in marched reality. 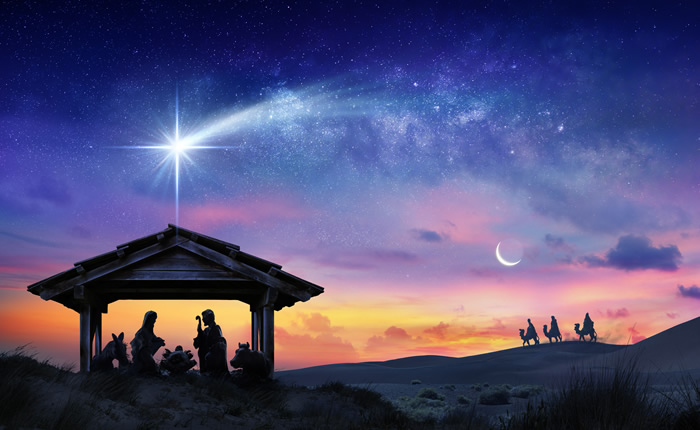 People with communicable diseases cannot fly on commercial planes. So Fred and I tossed a pillow and a blanket into the car and headed across the state to retrieve our daughter. By the time we returned, 600 miles later, I’d spent so much time fused to a car seat that my tail bone was numb.

Six hundred miles offers lots of time for thought. For the first hundred miles, I hosted a pity party for myself. Beth had never had chickenpox; Kathy probably would be contagious for a week; if so, Beth would likely stay in Denver rather than expose herself to this miserable disease; our family wouldn’t be together; all was lost. Lord, I silently whined, why doesn’t Christmas ever work out?

Undoubtedly, Mary and Joseph planned how Jesus’ birth would take place: in their own town, with the help of a midwife, supported by loved ones who would bring them food and also clothes for the baby. Nurtured and cherished by the whole community, this would be a birth to celebrate.

Scripture doesn’t report any chickenpox marring the first Christmas. Instead, it was a Roman ruler who threw Mary and Joseph’s plans into chaos. At the worst possible time, the two of them had to trek from Nazareth to Bethlehem. Our trip was much longer than theirs, but we traveled in a warm vehicle while listening to carols on our tape deck. They went on foot — or perhaps on a donkey — while Mary was nine months’ pregnant. If I had been ordered to make a similar trip while great with twins, Caesar Augustus himself couldn’t have made me go.

Fred and I weren’t the first to be deprived of family members at Christmas. That honor belongs to Mary and Joseph, whose only human guests were some unknown shepherds. The proud new parents must have been pleased that somebody showed up for their special event, but I suspect they longed to see their friends and loved ones, to be wrapped in the love and security of being home for Christmas.

Economically, I’d be surprised if Mary and Joseph had much to celebrate on that night almost two thousand years ago. The Gospel of Luke says Jesus was born in a stable because there was no room for him elsewhere. If Joseph could have afforded a few gold coins for a night’s lodging, the results probably would have been the same as today — a room would have appeared, even if it had been the room of the innkeeper himself.

Right from the start, some Christmases have moved beyond the imperfect into the tragic. Our cross-state trip included driving past a traffic fatality. All we could see of the dead man’s life were his papers blowing along the highway, sad reminders of how swiftly life can pass, how quickly it can end. I said a prayer for the family that learned on this December day that a loved one would never again spend Christmas with them.

Even this modern-day death had its equivalent in Matthew’s account of Jesus’ birth. The arrival of the newborn King threw Herod into such a rage that he ordered the murder of all Bethlehem boys two years old and under.

When I look at all my Christmases past, I see that not one of them has fit into the image projected in television ads. Those depict smiling, healthy families, dressed in color-coordinated outfits, gathered gaily around their color-coordinated trees. There’s always a mom, a dad, and two well-behaved youngsters. They laugh excitedly as they unwrap a power tool, a video game, a jacket, a bike, or some other material goodie — available, of course, from the advertiser. Nobody in the scene is covered with red crusted blotches of chickenpox. No one is divorced or widowed. No family member is missing, no adult is drunk, no child has the stomach flu, and certainly no one is fighting.

What the ads show us is perfection a la the fantasy world. They wouldn’t have wanted to feature our family on Christmas 1993. Beth couldn’t fly home because a thick fog enveloped our airport for days. Our beloved pet died on Christmas Eve. And Kathy was still sick.

As I sat alone in the living room on Christmas night and pondered our plans gone awry, my gaze fell on the Italian manger scene. Thirteen figures stood focusing on the fourteenth: the Christ Child. Mary, Joseph, sheep, shepherds, wise men, and donkey all had their eyes riveted on the baby in the manger. Even as carved figures, their attention seemed complete.

Looking at this scene in the glow of our Christmas lights, the real astonishment of Christmas began to unfold within me: nearly two thousand years ago, God became human!

The Creator of the universe entered into our lives, not by making everything perfect, but by becoming one of us. The only plan that didn’t go awry was the only plan that counted-God physically entered our hurting world.

A wave of gratitude and joy swept over me as I saw Christmas in a new way. God can break into our lives anywhere, anytime, in spite of obstacles. The obstacles may include being as homeless as Jesus, being as poor as Mary and Joseph, or being separated from loved ones. No matter. The perfect Christmas — then and now — is one in which Christ enters into our very real lives.